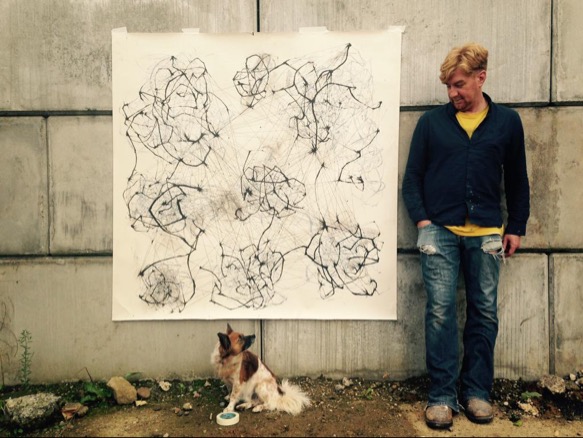 Mapping the internet gives it a form, even though it is simply a mass network of billions of interconnected computers. It’s this amorphous and intangible ‘space’ that David attempts to record within his work, drawing parallels between these new internet systems and 20th century scientific developments such as string theory, characterised by common features such as clustering and weak or strong links.

This translates into a visual language that is diagrammatic at first. The use of background grids enables David to begin with a structure that he can then begin to dismantle; an old language approach to a new language phenomenon. These paintings and drawings seek to take formal qualities of abstraction – line, shape and colour – and give them a shake, scattering and stretching connections and references which give the resulting works a sense of tension and movement.

They could also be read as a metaphor for an individual’s autonomy within a system, and our attempts to make sense of the structures within which we do/ don’t choose to operate. David undertakes a process of erasure in building up his picture surface. After continued reworking these paintings and drawings gain enough character to stand up for themselves on the wall and have space to breathe and to reflect their surroundings.

Despite the profound subject matter, these works are also playful. The viewer is invited, in ‘reading’ the pictures, to inhabit that actions that are involved in their making – dripping, pouring, squishing, stretching. The geometric shapes that cascade across the paintings and drawings interrupt the network and connections, almost like pinball machines which refract the lines elsewhere to form new connections.   Based at TAP studios in Southend, David has recently tended towards collaborative working with his peers. The nature of his work, with its focus on networks and connectivity, has reinforced this in the past but with this all-new series of paintings and drawings, David is reflecting on new languages and forms.

David graduated from University of Wolverhampton in 1997 in Fine Art (painting with sculpture) and spent six months on a study exchange program at the University of Buffalo, New York. He has exhibited widely since then, including at Focal Point Gallery, the London Art Fair, Clerkenwell Gallery, Firstsite Gallery, the Griffin Gallery, the Mall Galleries, London and Dakar Biennale, Senegal.