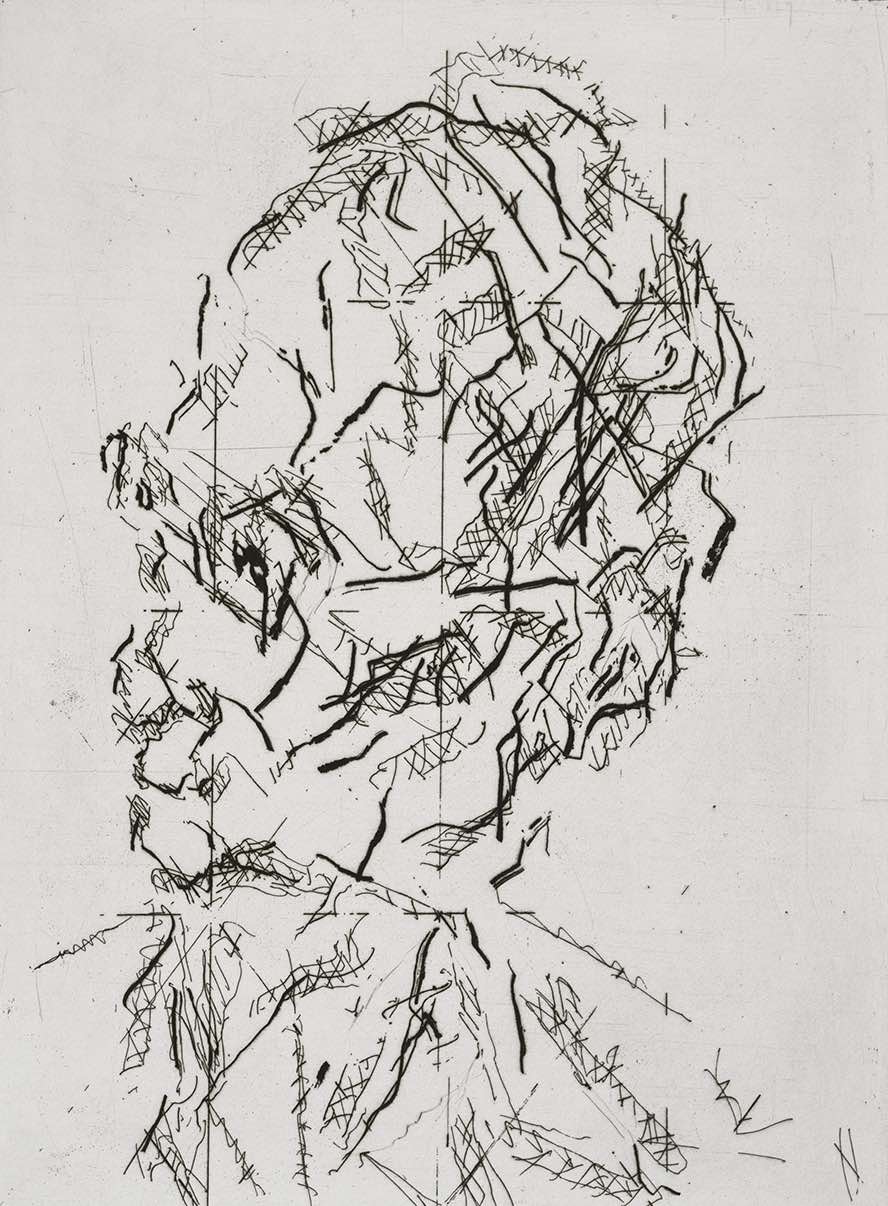 Frank Auerbach is one of Britain’s pre-eminent postwar artists.  His subject matter is rooted in his north London surroundings or people he knows well – painting and drawing them over and over again. His oils, drawings, and prints reveal an intense observation of the subject; he makes his mark with authority and finality, to arrive at the essence of his subject.  Auerbach’s signature thick black lines and the furious mark-making he employs, give his work an energetic quality. He holds a deep reverence for the ‘magic’ of printmaking, particularly etching and dry point, to reveal the essential qualities he seeks to express. He has completed, however, fewer than 40 editions throughout his career but increasingly working on a larger scale on a par with painting.  For weeks and sometimes years, he observes and portrays the same people from among his circle of acquaintances who are asked to sit for him at regular times and days of the week, so that he can draw and paint them obsessively, over and over again, giving them rigorous attention.  Some of the prints demonstrate Auerbach’s experimental use of multiple plates resulting in a delicate tracery of lines in black and in gold or silver.  As with his portraits, Auerbach returns to the same landmarks, to paint and draw his urban landscapes, such as the chimney of a former cigarette factory or a particular tree in the vicinity of his studio in Camden Town.

His work is an expression of his very personal vision and experience by means of repetition and limitation, to concentrate the search for insight: into another person, into the self and into the world.  His personal story is telling.  He was born in Berlin in 1931 but sent to a boarding school for Jewish refugee children in Kent in 1939.  His parents, who remained in Germany, died in concentration camps.  He studied at St Martin’s School of Art, from 1948 to 1952, and met David Bomberg in night classes at Borough Polytechnic and developed a friendship with fellow student Leon Kossoff. He then went on to study at the Royal College of Art from 1952 to 1955. Auerbach exhibited regularly at the Beaux-Arts Gallery until 1963. From 1965 he exhibited at the Marlborough Gallery and was given an Arts Council retrospective at the Hayward Gallery, London in 1978, and had solo exhibitions at the British Pavilion in the 1986 Venice Biennale, and at the Rijksmuseum Vincent Van Gogh, Amsterdam, 1989.  Rarely leaving England (he is now in his 80’s), he has had the same studio since the 1950s.