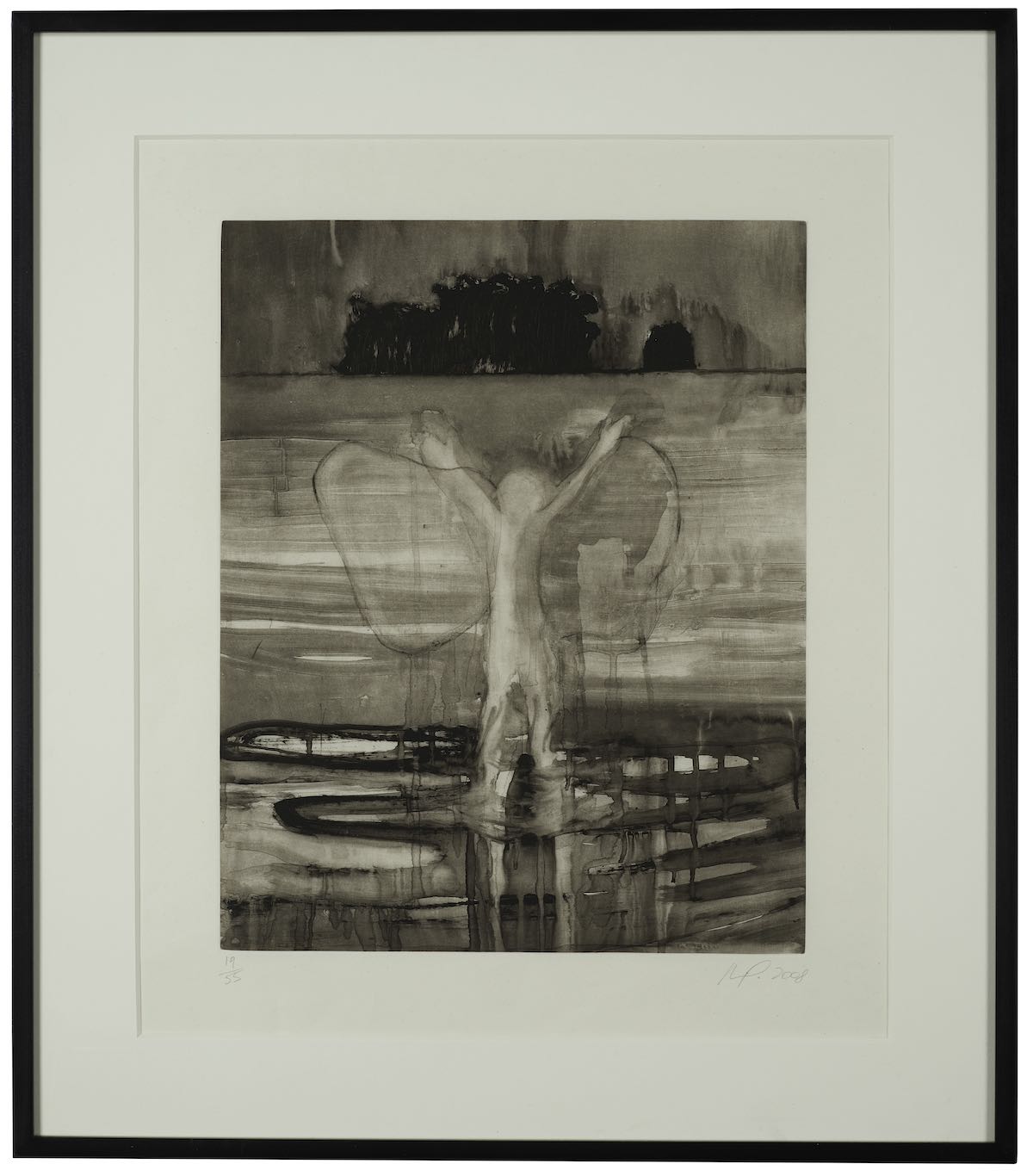 One of the best known and commercially successful living artists, Peter Doig’s unexpected painterly compositions give his work a magical/realistic feel.  He has perhaps become most well known for his series of paintings of Le Corbusier’s modernist urban structures, partially revealed and hidden by the forest that surrounds them, and for White Canoe sold at Sotheby’s for $11.3 million in 2007. At the time this sale was the highest recorded for any living European artist.  His work is inspired by the flow of things seen every day, from past and present.  His paintings have a tendency to disorientate us, even when they depict recognisable imagery such as figures and buildings. We are often plunged into an unreliable world of reflections, sometimes literally when we are presented with the icy lakes and watery depths (that feature in his earlier paintings), but more often in a metaphorical sense – the mirror image of memory or fantasy.

Peter Doig (born in Edinburgh 1959) is celebrated as one of the most important figurative painters working today.  As a child, he spent time with his family living in Trinidad and Canada but came to England in 1979 to study fine art at Wimbledon, St Martin’s and Chelsea School of Art.  With his focus on figurative painting, Peter Doig did not obviously fit into the YBA art scene of the 1980’s and disregarded the prevailing trend for a cool, processed aesthetic.  Instead, he made oil paintings of landscape subjects which were disarmingly romantic and vernacular in character, in a conscious effort to find his own new approach to painting.  His paintings were splendidly layered formally and conceptually, drawing on art history from Edvard Munch, Claude Monet, Friedrich and Klimt.

‘Since I had just come back from Canada and was again searching for a subject, I started making these quite homely paintings, paintings of quite modest subjects’, he says.  Redolent of his Canadian upbringing, these landscapes were not direct representations but fictionalised images Peter Doig carried in his mind: ‘I want it to be more of an imaginary place – a place that’s somehow a wilderness’.  Shortly after graduating, Doig was awarded the prestigious Whitechapel Artist Prize, culminating in a solo exhibition at the Whitechapel Art Gallery.  In 1993 he won first prize at the John Moores exhibition with his painting ‘Blotter’ and in 1994 was nominated for the Turner Prize.  He has continued to challenge his own approach to painting and picture-making through the unpredictable evolution of his subjects and compositions with themes appearing and reappearing, to become internationally acclaimed as one of today’s leading painters.

In 2002 Peter Doig moved back to Trinidad, where he set up a studio at the Caribbean Contemporary Arts centre near Port of Spain. Also at this time Peter Doig became professor at the Fine Arts Academy in Dusseldorf, Germany. His ideas for painting continue to be stimulated by incidental, everyday, details that he has noticed and photographed: deriving from disparate visual sources that may superficially connect to Trinidadian subjects. Whatever Peter Doig’s starting point, the motif is filtered through multiple studies, and is subject to continual change driven unpredictably by what happens when the paint is applied to the canvas.

Today, his works are held in the collections of the Art Institute of Chicago, the National Gallery of Art in Washington, D.C., the Tate Gallery in London, and the Goetz Collection in Munich, among others.